This is a very solid and interesting list of Learning Technologies.  I took a second and found some alternatives I wasn’t aware of and didn’t use.  You might find the same.  From EDUCAUSE. 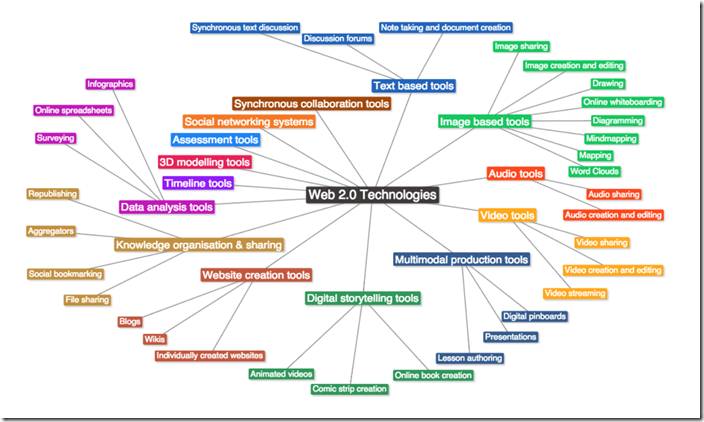 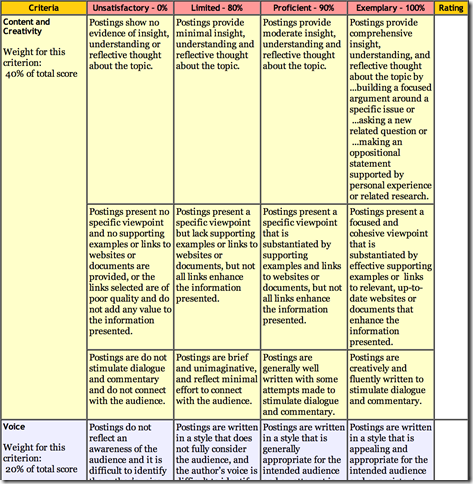 For those of us using or planning to integrating blogging as an instructional activity in class, the rubric below from the University of Wisconsin Stout is definitely a must have. This rubric is available for free and can be downloaded in PDF format.

END_OF_DOCUMENT_TOKEN_TO_BE_REPLACED

I just received a copy of The Hobbit disc as a gift and so, I wondered if there were educational resources available for it and I found these.

Download Eight Free Lectures on The Hobbit by “The Tolkien Professor,” Corey Olsen

The name Corey Olsen may already be familiar to some readers—or at least those readers who venerate the literary accomplishments of one J.R.R. Tolkien. And if you don’t know Olsen by his real name, you may know him as “The Tolkien Professor,” his internet moniker since 2009, when Olsen, an English Professor at Washington College and lifelong student of Tolkien’s writing, decided to share his own scholarly work with a public “eager to be included in thoughtful, literary conversation” about The Hobbit and The Lord of the Rings trilogy.

For the past four years, Olsen has published specifically online lectures about Tolkien’s work, as well as recordings of his Washington College seminars on Tolkien’s fiction and academic work. He has most recently founded Signum University, an online, non-profit Liberal Arts college that aims to open the experience of high-quality higher ed to everyone, regardless of their means or their location. Signum has, in turn, spawned the Mythgard Institute, which seems (as the name implies) more exclusively focused on the fantasy and science fiction genres that are Olsen’s métier. (There are also college prep options in Signum andMythgard Academies).

So, Professor Olsen is busy, and he’s happy to be sharing his wealth of Tolkien knowledge with a very receptive public. His most recent course, an eight-part lecture series on The Hobbit, is now available on his site. (iTunes U also has it as of January 31st. Watch the promo for the course above. We also have the class listed in our collection of 650 Free Courses Online.) The course comes via the Mythgard Institute and begins at the beginning in a lecture entitled “Took & Baggins” focused on The Hobbit’s first chapter, “An Unexpected Party.” Recorded before the release of Peter Jackson’s first installment of his trilogy of Hobbit films, the lecture starts with Olsen’s speculations about what those films might look like. He says:

From the beginning, I have thought this was a mistake… a big mistake to go backwards. It seems to me that an audience familiar with the epic grandeur of Peter Jackson’s trilogy is going to bring expectations to a new Tolkien movie that’s going to set a Hobbit film up for one of two very likely failures. Either the movie is going to try tell Bilbo’s story in the mode and register of the Lord of the Rings, and therefore strip the story of the light-heartedness and whimsicality that makes it so delightful, or it’s going to try to be true to the tone and spirit of the book, and will therefore seem kind of silly and childish to an audience hoping for a successor to Peter Jackson’s films.

This is a very canny prediction, and such canniness distinguishes Olsen’s approach to everything Tolkien. He is attuned not only to all of the scholarly minutiae that distinguishes academic Tolkien studies, but he is also well-aware of issues of audience reception and the ever-evolving role of Tolkien’s work in popular culture. As his first lecture continues, Professor Olsen makes it quite clear that The Hobbit was deliberately written as a children’s story, and the successive books were meant to be as well. The Lord of the Rings books became more adult, darker and more fraught with heavy theological and mythical significance, as Tolkien composed them. This happened in part because Tolkien was writing with his own children in mind as his readers, and as he wrote, his kids grew up.

Tolkien, Olsen points out, was by training a philologist—a scholar who specializes in the study of languages—so he thought about not only what words mean, but where they come from and when. As such, he intended The Hobbit to possess a “linguistic playfulness,” mixing ancient and modern words and usages, making up words a la Lewis Carroll, to create a lighthearted and comic atmosphere from the beginning of the novel. Olsen provides us with several examples of this method in his first lecture. Overall, his analysis is a thorough evaluation of the novel in the terms of its language, its composition, its many layers of genre and style—drawing from Tolkien’s explicitly articulated theories of narrative—and its historical and literary allusions. All presented in a very enthusiastic and accessible style that is aimed at every adult reader and lover of Tolkien, not just fellow scholars, who tend to speak a specialized language that excludes nearly everyone outside their narrow coterie.

In the video above—a TED talk Olsen delivered at TEDx Chester River—he discusses how the world of academe, that specialized world that excludes almost everyone, had become a stifling and rather meaningless place for him when he decided to become the online Tolkien Professor.  Olsen had what he calls an existential crisis about academia and scholarly publishing—What’s the point?, he thought. Who’s going to read it? Since most people can’t access scholarly publications even if they wanted to, and since he was writing on Tolkien, one of the world’s most popular authors, he felt doubly irrelevant as a cloistered academic, since Tolkien fans are everywhere. Then he discovered something everybody else already knew about the internet—it’s an ideal medium for publishing and disseminating any kind of information, and it’s crowded with people desperate to learn about and discuss the liberal arts. As more and more academics discover this as well, more also cure their existential malaise by opening up their work to everyone online, becoming resources, not gatekeepers, for knowledge.

Listen to J.R.R. Tolkien Read a Lengthy Excerpt from The Hobbit (1952)

Listen to J.R.R. Tolkien Read Poems from The Fellowship of the Ring, in Elvish and English (1952)

They may not be correct, but they certainly aren’t wrong.  Envisioning Tech.

My short list of tools that need to improve at a school include a better gradebook, a CRM (no, not an educational flavored one), micro standard driven badges, college and career awareness and planning tools, and ePortfolios.

The dismal state of these tools, many of which were developed so long ago as to be of minimal practical value makes this a fight we are losing and the reality is that only this fight matters.  Without these tools, we aren’t going to succeed with learners, not in today’s Educational marketplace.

Read Tom Vander Ark’s 10 Must-Have to Lift Us from the Grading Quagmire for more information on this subject in general.