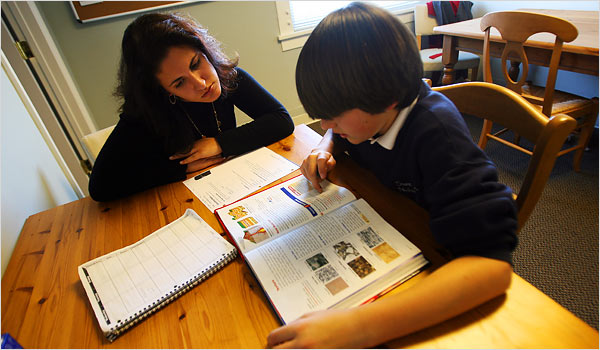 Ana Homayoun tutoring Robert Gittings, a sixth grader, above, teaching him how to organize his classwork.

LOS ALTOS, Calif. — “Can we take a look at your backpack?” 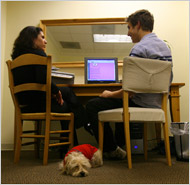 Ms. Homayoun with Chris Picetti, a junior, and her dog, Mason.

Ana Homayoun repeats that question countless times a day. No, she does not screen airline
passengers or work security at a basketball arena.

Ms. Homayoun is a tutor. She helps teenagers with subjects like math and science,
but she particularly specializes in teaching boys how to become more
organized.

One afternoon in her cozy office suite in this affluent suburb south of San Francisco, she asked John Ferrari, 14, togo through a two-inch stack of papers he pulled from his backpack. He sorted through the papers, placing them in separate piles — writing, spelling, vocabulary, tests — to bring order to his loose-leaf binder.

“Oh, here’s my class schedule, what a relief,” said John, an eighth grader.

A moment later, he stumbled across something even more valuable. “I
have to turn this in tomorrow,” John said. “It’s the name I want on my
diploma.”

With girls outperforming boys these days in high school
and college, educators have been sparring over whether there is a
crisis in the education of boys. Some suggest the need for more
single-sex schools, more male role models or new teaching techniques.
Others are experimenting with physical changes in classrooms that
encourage boys to move around, rather than trying to anchor them to
their seats.

But as they debate, high-priced tutors and college counselors have jumped into the fray by charging as much as $100 an hour and up to bring boys to heel.

The tutors say their main focus is organizational skills because boys seem generally to have more difficulty getting organized and multitasking than girls do.

And so private counselors in places as diverse as Chicago, New York
City, Sarasota, Fla., and Bennington, Vt., who guide juniors and
seniors in applying to college, have devised elaborate systems — from
color-coded, four-month calendars that mark dozens of deadlines to file
boxes that students must take to each session.

Donna Goldberg began working with students in Manhattan on how to get organized 17
years ago. Her inspiration was her own son, then in seventh grade. Mrs.
Goldberg was astonished to learn that he had not been turning in any
homework.

“He opened his backpack, which was really a black hole,
and he said, ‘Here it is,’ ” she said. He had not understood that in
seventh grade he was responsible for handing in his homework, instead
of waiting to be asked.

Some educators think the tutors are on the right track, whether or not there is science to back them up. “The guys just don’t seem to develop the skills that involve organization as
early,” said Judith Kleinfeld, a psychology professor at the University
of Alaska and founder of the Boys Project, a coalition of researchers,
educators and parents to address boys’ problems.

Mrs. Goldberg, Ms. Homayoun and other private tutors say boys must learn not only how
to organize, but also how to manage their time and even how to study.

Robert Gittings, a sixth grader, has been coming weekly to work with
Ms. Homayoun since September. He, too, is asked to empty his backpack,
and on one visit, cheerfully removed a vast collection of textbooks,
binders, workbooks, paperback books and hardcover library books.

Most of the binders were orderly and reasonably neat. But there was a
stack of papers from science, nearly an inch thick, that needed to be
sorted.

“Do you have homework for tonight?” Ms. Homayoun asked.

He replied, “We have a work sheet.” But it was not in the homework section of the science binder or in his daily planner.

Then Robert remembered where he put it. From a side pocket of his
backpack, he pulled a sheet of paper that has been folded into a tiny
rectangle.

Ms. Homayoun laughed and said gently, “Maybe we should put that in the homework section?”

Ms. Homayoun opened her business, Green Ivy Educational Consulting, not long after graduating from Duke University
in 2001. She created her organizational system — basically an
elaboration of the ways she studied in high school — after she began
tutoring six years ago.

“I would ask, What’s the class that troubles you the most?” she said. “I would ask to see the binder, and it would always be the messiest.”

She requires her clients to have a three-ring, loose-leaf binder for each academic subject, to
divide each binder into five sections — notes, homework, handouts,
tests and quizzes, and blank paper — and to use a hole puncher
relentlessly, so that every sheet of school-related paper is put into
its proper home.

Students must maintain a daily planner; they are required to number the order in which they want to do each day’s homework and draw a box next to each assignment, so it can be checked
off when completed.

Homework must be done in a two-hour block in a quiet room, with absolutely no distractions: no instant messaging, no Internet, no music, no cellphone, no television.

While some girls need help getting organized, at least three-quarters of her
students are boys, Ms. Homayoun said. Girls usually adopt her methods
more quickly.

“Girls pick up on this much faster,” said Ms.
Homayoun, 28, who has a relaxed but firm manner and a gift for
diplomacy with teenagers and their parents. “Boys, you still have to be
on them for a while. They’re not going to pick up on it immediately.
You have to roll with it.”

Two seniors arrived for weekly appointments, expecting to complete their college applications and file them online. But the tutor discovered that one boy left out sections of
basic personal information on his application, while the other missed a
requirement for three short essays by the University of Virginia. Each was disappointed that there was more work to do.

“Sorry,” she consoled one. “It’s like thinking you’ve finished a marathon and finding out you have three miles left.”

With guidance and constant follow-up, boys can make significant progress,
Ms. Homayoun said. Ernie McMillan, 17, a high school senior who has
been working with her since the summer before his junior year, is one
example. He created orderly binders, kept on top of his daily planner,
took notes while reading and even agreed to eliminate distractions
during homework.

In the spring of his sophomore year, Mr. McMillan had a 2.8 grade-point average, a B-minus. After working with Ms. Homayoun, he raised his average to 3.1 in the first semester of his
junior year. Last spring, he brought it up to 3.5, a B-plus.

“I was really happy about that,” he said. “I always thought I could do it,
and I didn’t understand why I couldn’t. I just needed that backing,
that structure. I was turning in my assignments on time. I was working
ahead on my classes. I was organized in a way I never had been before.”

Mr. McMillan stopped for a moment, before adding, “She totally reworked my backpack, too.”