Getting the Whole Picture, in and Out of Class 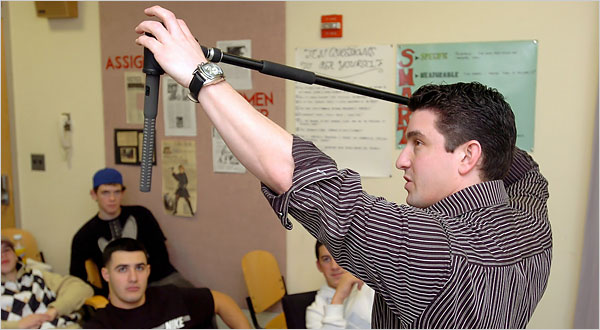 LIFE IN THE FILM LANE Michael Goldstein teaches
students in film classes at Eastchester High School. He says he covers
“all factors from pre- to postproduction.”

RESPONDING to the film classes and
clubs proliferating in high schools around the county, the Westchester
International Film Festival has added a Future Filmmakers Division this
year. The student submissions in grades 9 through 12 will be screened
at the City Center 15: Cinema de Lux in White Plains on March 9 and,
through the support of the Matthew S. Hisiger Film Foundation, the
student capturing first prize will win $1,000 and the student’s school
will receive a professional high-definition camera package valued at
$5,000.

In the Region
Long Island, Westchester, Connecticut and New Jersey

Iris Stevens is the director
of both the Westchester County Office of Film and Television and the
film festival. When she and members of her staff called every high
school in the county to promote their new competition, they discovered
what she called a “staggering statistic.”

“Of the 63 public and private high schools in Westchester,” she said, “only 12 do not have some form of film education!”

At
Hastings High School, the English department chairman, Michael Mahony,
has been teaching two film courses — analyzing Hollywood films and
creating nonfiction films — since 1994. Recent annual enrollment has
been as high as 90 students. The school has had a Film Society for more
than 10 years and a film festival for three. As part of a new senior
alternative last spring, 15 students worked on a documentary under Dr.
Mahony’s direction and several current seniors have already approached
him to sponsor their individual filmmaking efforts.

“Film is one
medium that students seem to intrinsically value, maybe more than any
other, and students from both ends of the academic spectrum thrive in
the classes,” Dr. Mahony said. “Recently, I’ve had many more who are
seriously considering the film industry.” A number of his former
students have gone on to film school, and Benh Zeitlin, a 2000 Hastings
High School graduate, won the award for Best Animated Short at the 2005
Slamdance Film Festival in Park City, Utah.

Byram Hills High
School offered only one film media class when David McMichael began
teaching in its art department 10 years ago. Now, he and another
teacher work with about 150 students each year in Film I, Film II and
Advanced Film Workshop. The school has two film clubs — one for
watching and one for making movies — and a yearly screening of the best
student films.

“Kids are watching a ton more films these days
in so many different ways — on iPods, computers, pay-per-view, DVDs —
and it has become technically much easier to make a film because
extremely sophisticated tools are less expensive and easier to
acquire,” Mr. McMichael said. “And since students are able to make
movies in school and be involved in so many aspects of filmmaking —
operating the camera, directing, acting and editing — they can get a
better idea of the whole picture.”

Six years ago, Eastchester
High School’s director of technology, Anita Better, recognized the need
for a full-time person to take charge of the school’s TV studio and
Michael Goldstein was hired as a teaching media specialist. After
converting the simple studio to a media production center, he began
teaching two levels of film courses in which, he said, he covers “all
factors from pre- to postproduction, including concept ideas,
screenplay writing and formatting, storyboard design, filming,
lighting, sound and computer-based editing.” Mr. Goldstein anticipates
that the Eastchester Film Festival, complete with its own version of
the Academy Awards, will screen close to three hours of student films
this spring.

“I don’t think this increased interest in film is a
blip or an aberration,” Ms. Stevens said. “It’s something that’s very
real within the teen and young adult community. Education is changing
in response to the kinds of careers young people want to go into and
filmmaking is becoming a major player.”