This article was in the NYTimes this morning and it was an affirmation of the direction I am putting in place for my school. 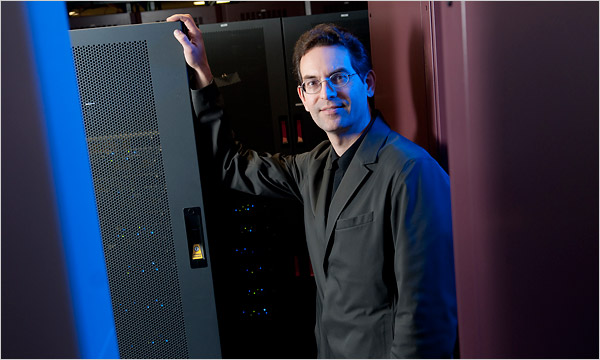 The following archival copy is only in the event the original article disappears.  Please go back and read the full article from the NYTimes site.  It isn’t simply a matter of honorably allowing the advertisers to provide their services and pay for this kind of well written article, the related articles and comments are the best part of the online experience and not reproduced here.

Read the article at http://www.nytimes.com/2009/12/21/technology/21nerds.html?ref=technology

Growing up in the ’70s, John Halamka was a bookish child with a penchant for science and electronics. He wore black horn-rimmed glasses and buttoned his shirts up to the collar. 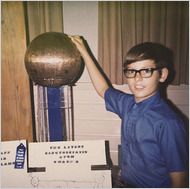 Ten-year-old John Halamka winning the Science Fair in 4th grade with his home-built Van De Graff generator in 1972. The digital economy is seeking more children like him. 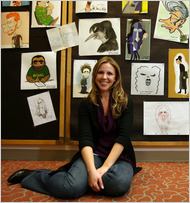 “I was constantly being called a geek or a nerd,” he recalled, chuckling.

Dr. Halamka grew up to be something of a cool nerd, with a career that combines his deep interests in medicine and computing, and downtime that involves rock climbing and kayaking.

Now 47, Dr. Halamka is the chief information officer at the Harvard Medical School, a practicing emergency-ward physician and an adviser to the Obama administration on electronic health records.

Hybrid careers like Dr. Halamka’s that combine computing with other fields will increasingly be the new American jobs of the future, labor experts say. In other words, the nation’s economy is going to need more cool nerds. But not enough young people are embracing computing — often because they are leery of being branded nerds.

Educators and technologists say two things need to change: the image of computing work, and computer science education in high schools. Teacher groups, professional organizations like the Association for Computing Machinery and the National Science Foundation are pushing for these changes, but so are major technology companies including Google, Microsoft and Intel. One step in their campaign came the week of Dec. 7, National Computer Science Education Week, which was celebrated with events in schools and online.

Today, introductory courses in computer science are too often focused merely on teaching students to use software like word processing and spreadsheet programs, said Janice C. Cuny, a program director at the National Science Foundation. The Advanced Placement curriculum, she added, concentrates narrowly on programming. “We’re not showing and teaching kids the magic of computing,” Ms. Cuny said.

The agency is working to change this by developing a new introductory high school course and seeking to overhaul Advanced Placement courses as well. It hopes to train 10,000 high school teachers in the modernized courses by 2015.

One goal, Ms. Cuny and others say, is to explain the steady march and broad reach of computing across the sciences, industries, culture and society. Yes, they say, the computing tools young people see and use every day — e-mail, text-messaging and Facebook — are part of the story. But so are the advances in field after field that are made possible by computing, like gene-sequencing that unlocks the mysteries of life and simulations that model climate change.

That message must resonate with parents and school administrators, they say, if local school districts are to expand their computer science programs.

“We need to gain an understanding in the population that education in computer science is both extraordinarily important and extraordinarily interesting,” said Alfred Spector, vice president for research and special initiatives at Google. “The fear is that if you pursue computer science, you will be stuck in a basement, writing code. That is absolutely not the reality.”

Kira Lehtomaki can attest to this. She came to computing by way of art and movies. Art projects, not computers, were her childhood passions. She loved watching videos of Disney movies like “Sleeping Beauty” and “Dumbo,” and wanted to grow up to be one of those artists who stirred life into characters using pencils and paper. She even took a summer job at Disneyland as a “cookie artist,” painting designs and Mickey Mouse faces on baked goods, because she was allowed to spend a few days with Disney’s animators.

Yet as a 19-year-old college student in 2001, Ms. Lehtomaki saw the Pixar film “Monsters, Inc.” and was impressed by how good computer animation had become. At the University of Washington, she pursued computer graphics, graduating with a degree in computer science.

Today Ms. Lehtomaki, 27, is an animator at Walt Disney Animation Studios, working on “Rapunzel,” which is scheduled to be released next year. She does her drawing on a computer, using specialized graphics and modeling software. Her computer science education, she said, is an asset every day in her work, less for technical skills than for what she learned about analytic thinking.

“Computer science taught me how to think about things, how to break down and solve complex problems,” Ms. Lehtomaki said.

Reformulating a seemingly difficult problem into something a person can know how to solve is “computational thinking,” which the new high school courses are intended to nurture. Some schools in Los Angeles County are experimenting with the introductory course, called “Exploring Computer Science,” including South East High School in South Gate, Calif. Last year, 35 students were in a pilot program, and this year the course is being taken by 130 students.

Most of the school’s 2,800 students come from low-income families and qualify for free or subsidized school lunches. In the new class, students create projects that address subjects of their interest, like gang violence and recycling, said John Landa, who teaches the course.

“It’s much more engaging,” Mr. Landa said. “And the idea is not to have most or all of them go into computer science, but to give kids a chance to try things out. The course is designed to give kids a sense of computational thinking no matter what they do after this.”

A solid grounding in computing, experts say, promises rewards well beyond computer science. Most new jobs in the modern economy will be heavily influenced by technology, said Robert Reich, a professor at the University of California, Berkeley, and former labor secretary in the Clinton administration. And they will require education beyond high school, though often two years or less.

“Most of them will not be pure technology jobs, designing computer software and hardware products, but they will involve applying computing and technology-influenced skills to every industry,” Mr. Reich said. “Think Geek Squads in other fields,” he added, referring to a popular tech-support service.

These workers, he said, will be needed in large numbers to install, service, upgrade and use computer technology in sectors like energy and health care.

The Obama administration, as part of the economic stimulus, has increased federal financing for science and technology education. More immediately, its multibillion-dollar program to accelerate the adoption of computerized health records may generate more than 200,000 jobs, analysts estimate.

“These are jobs for what I think of as digital technicians,” Mr. Reich said. “And they are at the core of the new middle-wage middle class.”

At South East High School, Mario Calleros, an 18-year-old senior, may be one of them. He took the new course last year, after his interest was piqued by his experience playing computer games. “I really wanted to know how they worked,” he said.

Mr. Calleros picked up a sense of game technology by making his own, an action game with a knights-in-armor motif. Last summer, he won an internship at the Center for Embedded Networked Sensing at the University of California, Los Angeles. In the summer program, Mr. Calleros and a partner built a smartphone application, linking pictures, text descriptions and GPS location data to explain the history, architecture and amenities of individual buildings on the U.C.L.A. campus as users walk by.

Mr. Calleros is applying to college and plans to major in computer science. His teacher, Mr. Landa, pointing to the new high school curriculum, said: “It’s small and we’re just under way, but I think we’re going in the right direction here.”